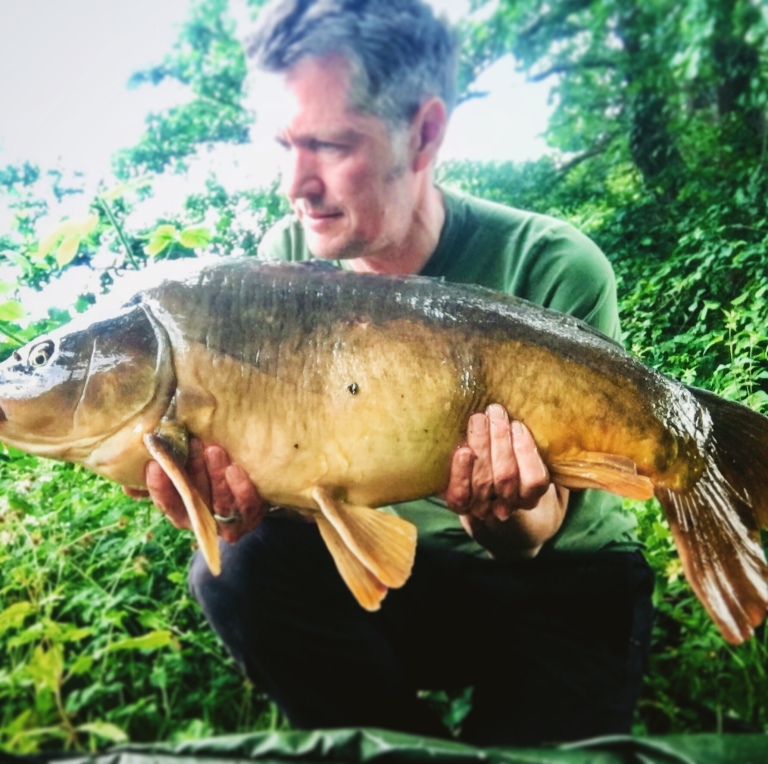 What’s the story then …

It is only the second visit to the estate lake and I arrived at 5am a little bleary eyed but greeted by one car in the car park – excellent!

I quickly walked the east bank but saw nothing. I had been warned previously that the carp were wily old things and reluctant to show themselves.

The opposite bank looked more inviting as the sun slowly rose so I loaded the barrow and walked along the dam wall. Half way across there was a splash behind me in the margins where the bream had been spawning on my first visit (Welcome To The Jungle).

I about turned and headed back to the swim nearest the willows and lightly baited the area with Baitworks Royal Marine boilies that I had glazed in pepper oil two days earlier.

I decided to fish the same boilie on the hair topped with half a Scent From Hell pop-up that had been infused with the booster for the last two weeks. The Korda curved krank hook was tied KD style – my own little twist on the classic snowman presentation.

The other rod was a Royal Marine fluoro pop-up Ronnie Rig and cast mid water.

With some movement in the willow and fry shoals topping I was hopeful something was feeding – was it a carp? All the time I keep looking at the opposite back. A heron had stopped for its breakfast in the morning sun and something was inexorably calling me to that side of the lake.

Then bosh, 7am, the head and shoulders of a good sized carp appeared, twice!! It looked like a common as the heron took flight.

I wound in the pop-up and thought I could just reach it with my best casting.

My best was not good enough.

I packed down the gear still hoping, having had a liner, the willow rod would sound an alarm. But one by one the bird life across the lake was telling me where I should be: the blue flash of a kingfisher, a swan feeding along the margin and a tern plucking a fingerling from the water. Natures breakfast table was on the other side of the lake and I needed to be there.

Once across the dam wall I realise this margin came with its own unique challenges; between the tiny wooden stage stand swim (about four foot square) and the next swim there were the old rusty uprights of a long departed jetty or boathouse.

I catapulted about thirty boilies towards this structure before casting out. I remembered from a chapter in Adam Penning’s book to bait up before casting to push the carp out of the area just long enough to set the traps.

The left rod, closest to the margin trees was the same pop-up as before and the right the same snowman. I reckoned close to the trees would be choddy and further out clearer as the under current from the dam sluice to my right would perhaps keep the bottom relatively clear.

The rods were in place by 8.30am and shortly after a carp showed the other side the derelict jetty – typical!

By 9.45am I had resigned myself to the fact I had missed bite time but was happy to have found a good location for the next morning session.

On went the kettle, for one last tea before heading home.

Standing well back from the swim with my mug in hand the right rod signalled a take!

I jumped down onto the deck and lifted into a lump heading for cover. I eased the fish right into open water and started to gain line.

The first 40 yards were straight forward, the last ten not so, as the fish repeatedly broke the surface before setting off on short deep runs pulling line from the clutch. After fifteen minutes and one aborted net call the battle was over.

Looking in the net I was greeted by a chucky mirror carp with a big head, equalling large fins but smallish body.

Weighing in at 21lb 11oz I was delighted, my first twenty, my first on the new lake, my first with Baitworks and perfectly hooked in the scissors.

It was gone 10am now and I decided to call it a day, a very successful day, plus I had a Sunday roast to cook for the kids.

Before leaving I catapulted the last few boilies into the margins. Hopefully the old carp in the lake will take a liking to this excellent bait.