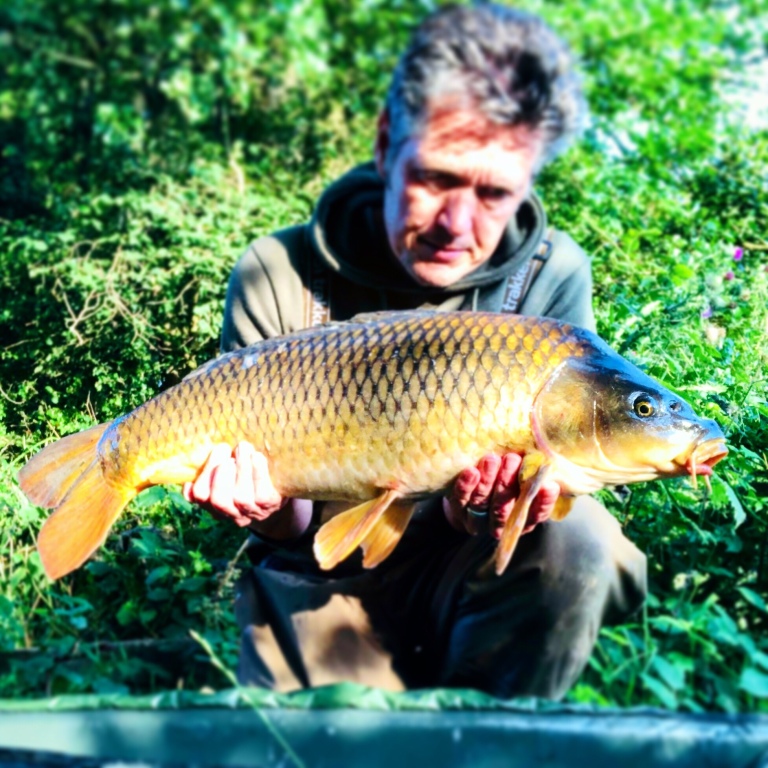 When the opportunity to fish consecutive mornings arose there was only going to be one answer!

The wife was still away on holiday with the little ones and I had a free weekend. Well as free as tiling a bathroom would allow!

The Stage swim at the estate lake had already produced two carp for me, a Mirror and a Common so that is where I found myself Saturday morning.

I had tweaked the presentation – a Multi rig – new Eagle Claw Tro Kap size 6 curved tied with Gardner Trickster loop section and a Tripwire boom joined with a Albright knot covered in Nash putty. I was concerned about presentation as previously weed was on the rigs when I wound in so I wanted the bait to ‘kick’ away more than my usual KD.

I also used a whole Scent From Hell dumbbell which nestled in a groove cut into a Royal Marine boilie so the bait would sink a little slower and waft a little more.

By 6am both rods were fishing and half an hour later a Common showed about 10 yards to the right of the right rod – game on!

True to form this rod was away at seven and I lifted into a fish. Fortunately I was already in the waders as I had to steer the carp away from sluice where some old branches had collected. Looking in the net I found a good Common, and more than likely the one that had shown earlier.

That made it three on the bounce from this swim and with this carp weighing over 15lb I was very happy.

The rest of the session was quiet and by 10am I was packing down the gear as bite time had passed.

After firing a few more boilies into the lake I was confident the carp would be dancing to the same tune the following day.

Now getting up at 4.30am for one day is easy. Repeating this, not so easy. Especially as I already had a carp this weekend and it would have been easy to roll over and deem the weekend a success. But I was keen to repeat the experience.

As on Saturday, Sunday mornings set-up followed the same drill and I was fishing by six.

My confidence was high, presentation was spot on, Baitworks Royal Marine was proving to be a mega bait, and the kingfisher was about (always a good sign).

But for some reason the morning felt different. There was a light drizzle at times and it was strangely oppressive and gloomy.

If I felt it so did the carp as there was not a ripple from a swim that had been so productive. A couple of liners lifted my spirits but there was to be no lifting into a fish and the session ended without a bite.

This second session, this other half of the weekend, this B-side did not live up to expectations.

It was a case of Fat[boy] Saturday Slim Sunday.

Was the honeymoon period over with the estate lake? Only time will tell over the coming months.

Finally to keep my options open I baited the tree line between Kingfishers and Two Logs with boilies, pellets and sweet corn.

Both days are free next weekend so here’s hoping it is an old skool double A-side!