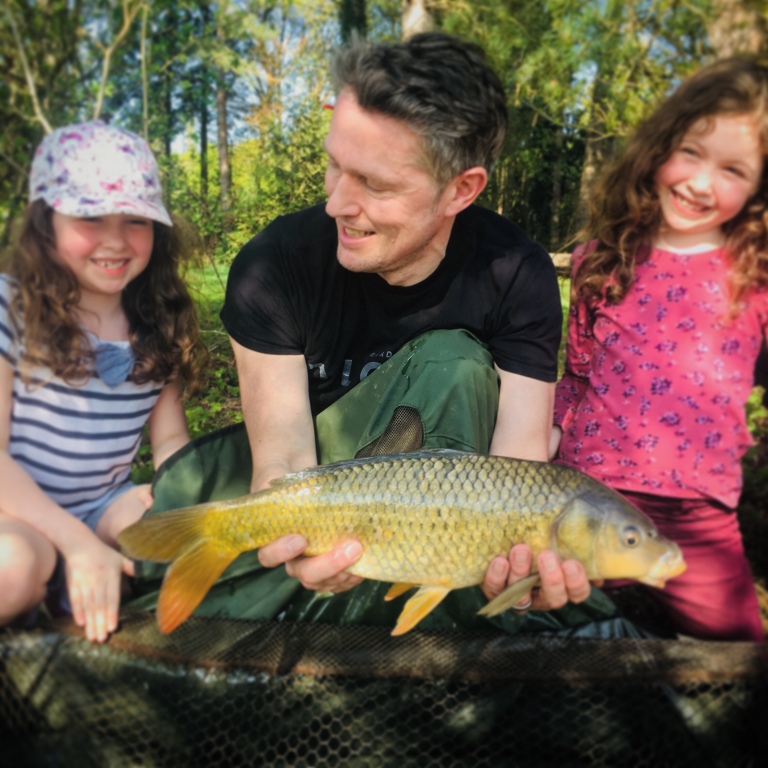 A lot of my blogs start with a musical theme or analogy; on a quiet days fishing there is often a tune bouncing around in my head. Today it was the turn of Sly & The Family Stone as the twins bounced on the bedchair bankside.

Now Bank Holidays are a no go for the serious carper – too many of us ‘noddies’ – but sometimes that’s all the time you have to fish and teach the kids to fish.

“One child grows up to be somebody that just loves to learn”.

With the weather set to be hot we decided on an afternoon/early evening session and set off for the lakes. Previously we fishing the large lake – A Short Spell – but knowing it would be busy, decided to try stalking and catching carp from the smaller.

Upon arriving it was obvious the carp were up in the water around the lily pads with the occasional dorsal fin breaking the surface.

To keep the girls entertained I set up a float rod which we’d fish sweetcorn slowly dropping through the water column.

A second with the floater gear and the third with the ever faithful Ronnie presentation if the carp settled on the baited area early evening. By the time this was all done the four other anglers had called it a day as sun shone down – we had the lake to ourselves!

Out went a few boilies (Richworth Tutti Fruitti) next to the lily pads to the left, some floaters open water ahead of us and the float and corn flicked to the right close a to snaggy tree where there was some movement.

After an hour or so and no bites someone was misbehaving – Lilli!

Time to move and mix it up. The floaters we being ignored, the snag was still but the pads were busy.

Out went the Ronnie presentation with a PVA bag of mixed pellets and boillie crumb and the float rod to the left as movement suggested carp in the upper layers. And within minutes Elle was rewarded with a lovely little scaly mirror on the sweetcorn, followed by a few roach.

Now at 5pm the pads were in dappled sunlight and looked promising following a couple of liners.

Sure enough bite time arrived with a single toner and I lifted into a carp determined to bury its head in the pads.

At the same time the float dived under and Lilli squealed in delight as another carp came to the surface, unfortunately the size 14 ‘pulled’ and a double take was not to be.

Back to the other rod and after a short tussle a pretty common slide over the net cord watched by my audience of two.

It was now 6pm and home time after four hours of family fun, a few fish and wonderful memories, which much like a great song, will revisit me from time to time.

2 thoughts on “It’s A Family Affair”